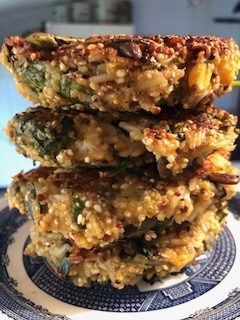 This recipe is from a cookbook I received as a gift, cookbooks are the way to my heart, but that’s another story. The cookbook is called; The South Coast Cookbook 2, its a food journey from Kiama to Eden, the recipe is from The Rivermouth General Store @ Tomakin, I’ve only included the pattie part of the recipe and I’ve only made a few minor changes to the recipe.

juice of one lemon

salt and pepper to season

Preheat the oven to 200 degrees, mix everything together, make into patties, the recipe makes seven good sized ones, put in the oven and cook for 15 minutes, turn over and cook for another 5 minutes and the patties are done.

You can have them with salad or veggies, or on their own, or you could have them for lunch on a spelt bread sandwich as well.