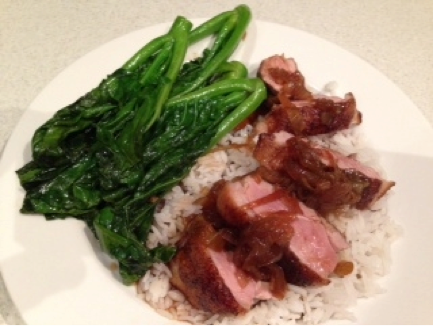 Bring stock to boil in a saucepan over high heat, heat 1 tablespoon of the peanut oil and fry eschallot and 1 clove of garlic until golden, add in combined soy sauce and brown sugar, and stir until mixed then add to chicken stock and keep on a high heat until reduced by about half.
Rub the five spice powder and salt into both sides of the duck breast, then place skin side down in a cold non-stick frypan and cook over a medium to high heat for five minutes, carefully drain the fat off and save for another dish – (duck fat chips) – then turn duck breast over for another five minutes, turn back over for two minutes then remove from pan and cover with foil to rest.
In the meantime put the other tablespoon of peanut oil into the same frying pan that you cooked the eschallot in, it is O.K that it has some remnants of the sauce in it do not clean it out, add in the other clove of garlic and ginger and stir fry for a minute then add in the Asian greens and stir fry until cooked but still a bit crunchy.
Slice the duck up after it has been resting for ten minutes, put down a couple of tablespoons of rice, and then a couple of tablespoons of sauce then the sliced duck and two more tablespoons of sauce. Serve with the Asian greens, of course you can use quinoa if rice is a problem.

*adapted from a Masterchef recipe by Samira August 2013