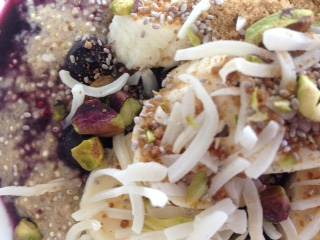 Combine quinoa, coconut milk, ½ cup water, seeds from half of the vanilla bean, and cinnamon in a saucepan, stir over a low heat for approximately five minutes or until thick, put a lid on the saucepan and turn the heat off and let continue to cook until quinoa is cooked. Meanwhile put the blueberries and honey into a saucepan and slowly heat them. In a small bowl combine the shredded coconut, pistachios, chia seeds and coconut sugar. When the quinoa is cooked, put into a serving bowl, add the blueberries, nut mixture and banana.